As Beijing continues to rapidly expand and modernise its missile capabilities, the People’s Liberation Army (PLA) Rocket Force has recently commissioned 22 new DF-26 intermediate range ballistic missile (IRBM) launching brigades to enlarge its already formidable arsenal. Dubbed ‘Guam Killer’ the missile has a similar role to North Korea’s Hwasong-12, in service since 2017, which incidentally shares the same informal designation due to its similar role and capabilities.

With both North Korea and China facing growing U.S. military deployments near their borders, both states have sought to develop advanced intermediate range strike capabilities to turn U.S. forward bases in the Pacific from assets into liabilities.

With reports from U.S. military think tanks such as RAND Corporation having indicated the vulnerability of facilities on Okinawa, Guam, Hawaii and elsewhere to ballistic missile strikes, the fact that the two East Asian powers have pursued similar capabilities to deter the United States is hardly surprising.

The DF-26 has an estimated range of 3000-4000km, and first entered service in 2015, two years before North Korea inducted its own analogous platform. The missile is solid fuelled and can deploy from highly mobile transporter erector launchers, significantly enhancing its survivability by allowing it to rapidly redeploy in times of war.

The missile can deploy both conventional and nuclear payloads.

The PLA Daily announced in the aftermath of the commissioning of the new missile bridges what roles the platforms were expected to fulfil. The report stated that the DF-26 was developed with two missions in mind, the first being to carry out “rapid nuclear counterattacks” and the second being to conduct “conventional medium and long-range precision strikes against important land targets and medium sized ships at sea.” 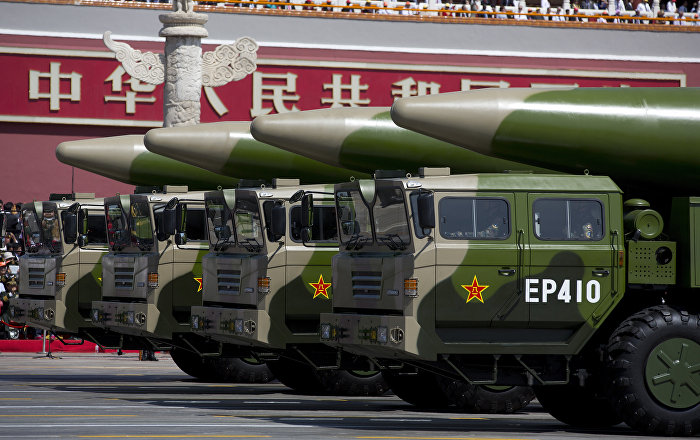 Both China and North Korea notably made separate but near simultaneous threats against American forward bases in the Pacific in 2017, amid growing tension between the United States and the two Asian powers. Both have thus adopted highly similar deterrence strategies, which include the parallel development of complementary intercontinental and intermediate range ballistic missile capabilities.

The DF-26 is Beijing’s example of the latter, and has been developed alongside a new generation of intercontinental ranged platforms such as the DF-41.