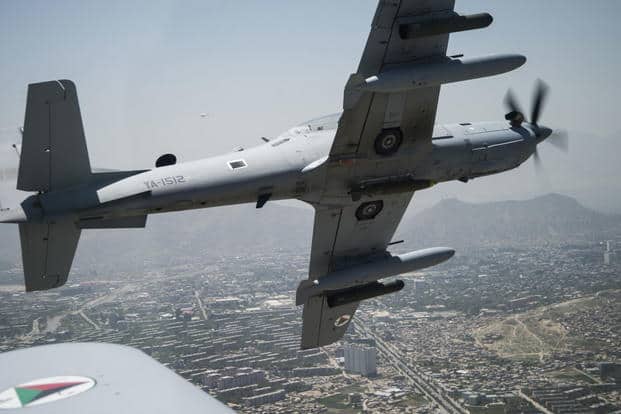 Editor’s note: In a sense, seeing how much the Air Force hates doing close air support for land troops, it’s understandable that the US special forces want an air force of their own.

But it also goes to show the sprawl that is the Empire. If Empire’s special forces weren’t present in over 80 countries and skirmishing with someone or other in dozens of them, there wouldn’t be a need for air regiments that do nothing but follow them around and support them in the first place.

Instead, the special forces are now so large and so active they do indeed require just such air wings.

The U.S. Air Force may only want a handful of light attack aircraft, but U.S. Special Operations Command now appears to want at least 75.

According to a new solicitation posted on the government’s acquisition and awards website, beta.sam.gov, SOCOM plans to host an industry day event seeking “armed overwatch” aircraft for its units.

If awarded, the contract is expected to be an “Indefinite Delivery/Indefinite Quantity (IDIQ) with a base 5-year ordering period and 2-year option ordering period.” SOCOM is looking to procure an estimated 75 aircraft “with associated support,” the request said.

The latest measure is independent of the Air Force’s ongoing work to buy a limited number of light attack aircraft.

In October, the Air Force issued an official request for proposal to acquire a small fleet of turboprop aircraft as part of its light attack effort.

The service said it wants a limited number of Textron Aviation AT-6 Wolverine and Sierra Nevada Corporation/Embraer Defense & Security A-29 Super Tucano aircraft to increase “partner capacity, capability, and interoperability via training and experimentation,” according to a release at the time.

The Air Force plans to purchase two or three light attack aircraft from each company [Ie the Air Force is dragging its feet, as it has been for over a decade, and really doesn’t want these planes], a decision Air Force Chief of Staff Gen David Goldfein first disclosed in March 2019.

He told the Senate Appropriations defense subcommittee during a hearing at the time that the service would base some of the aircraft at Nellis Air Force Base, Nevada, and some with Air Force Special Operations Command (AFSOC) at Hurlburt Field, Florida.

The AT-6 will be used by Air Combat Command at Nellis “for continued testing [these are proven and decades-old designs, how much more testing is needed?] and development of operational tactics and standards for exportable, tactical networks that improve interoperability with international partners,” Air Force officials said in October. The A-29, meanwhile, will be housed at Hurlburt “to develop an instructor pilot program for the Combat Aviation Advisory mission, to meet increased partner nation requests for light attack assistance.”

But some believe the Air Force hasn’t been moving fast enough on the program, one which showed early promise.

The service first held a series of light attack experimental fly-offs and maneuvers at Holloman Air Force Base, New Mexico, in 2017 in a two-phase approach. The experiment involved four aircraft: The AirTractor and L3’s AT-802L Longsword; Sierra Nevada and Embraer’s A-29 Super Tucano; and Textron and AirLand LLC’s Scorpion, as well as their AT-6B Wolverine. The second phase of the experiment was canceled following a fatal crash in June 2018.

A draft request for proposal was issued in August 2018. The service was then supposed to RFP in 2018 for a light attack aircraft, but it never came until the recent October 2019 solicitation.

The slowed pace angered some lawmakers.

Rep. Michael Waltz, R-Florida, introduced a measure into the House’s version of the fiscal 2020 National Defense Authorization Act legislation that would put the propeller-driven planes under U.S. Special Operations Command’s purview, taking it away from the Air Force.

“My frustration is almost palpable at why it is taking so long to get this platform out to where the warfighters need it,” Waltz said during a September Mitchell Institute event, as reported by DefenseOne.

“If we can’t move this program forward, then perhaps we need to explore if the Army needs that authority,” he said.

Our Sprawling Empire
Thanks for subscribing! Any daily digest sent will come with an unsubscribe link in the footer.