At least some of the ballistic missiles that China’s People’s Liberation Army fired into the South China Sea during an exercise earlier this year, which you can read about more in the War Zone‘s initial story on those drills, reportedly hit a moving target ship. If true, this would be the country’s first known demonstration of an actual long-range anti-ship ballistic missile capability, which could significantly change the operational calculus for any potential opponent, including the United States, in the disputed maritime region and elsewhere in the Pacific.

The South China Morning Post reported last week that Wang Xiangsui, a retired People’s Liberation Army (PLA) officer, had said that one DF-26B intermediate-range ballistic missile (IRBM) and one DF-21D medium-range ballistic missile (MRBM) had struck the target vessel as it sailed near the Paracel Island chain during the August exercise. Wang, who has been described as “well-connected” in the past, is best known as one of the co-authors of the 1999 book Unrestricted Warfare, which covered various asymmetric means to undermine and defeat countries that were technologically superior to China. It has become a highly influential text, and general concept, in national security circles.

“We launched the DF-21 and DF-26, and the missiles hit a vessel sailing south of the Paracel Islands,” Wang said during a closed-door gathering in China’s eastern Zhejiang province in October, according to the South China Morning Post. “Shortly after that, an American military attaché in Geneva, [Switzerland] complained and said it would lead to severe consequences if the missiles hit an American aircraft carrier. They see this as a show of force. But we are doing this because of their provocation.”

Wang does not appear to have given any details about the target ship, its construction, how fast it might have been moving, or how the PLA may have cued the missiles their target.

It remains unclear exactly how many missiles the PLA fired during the exercise on Aug. 26. South China Morning Post‘s initial report had indicated that two weapons had been launched, one DF-26B and one DF-21D, from sites in China’s northwestern Qinghai province and in Zhejiang, respectively. A subsequent report from Reuters said that the U.S. government had assessed that the Chinese had fired four ballistic missiles, in total.

“The Department of Defense is concerned about the People’s Republic of China (PRC) recent decision to conduct military exercises, including the firing of ballistic missiles, around the Paracel Islands in the South China Sea on August 23-29,” the Pentagon said in a statement on Aug. 27. “The PRC’s actions, including missile tests, further destabilize the situation in the South China Sea.”

The statement did not say anything about how many missiles the Chinese had fired in total or what types they had employed in the drill.

The DF-26B and the DF-21D are both understood to have maneuvering reentry vehicles capable at least of hitting large ships, such as aircraft carriers or large amphibious assault ships. The DF-21D has a maximum range in excess of 932 miles (1,500 kilometers), according to the Pentagon, while DF-26-series missiles can reportedly strike targets out to 2,500 miles.

Chinese media outlets, including the Hong Kong-based South China Morning Post, refer to the DF-21D, specifically, as a “carrier killer.” The longer-range DF-26 is nicknamed the “Guam Express or Guam Killer,” a reference to the strategic U.S. island territory in the western Pacific, which is home to major air and naval bases, but the B model with its maneuverable warhead also often gets referred to as a carrier killer missile, as well. Guam would be an important target for Chinese forces during any large-scale conflict. 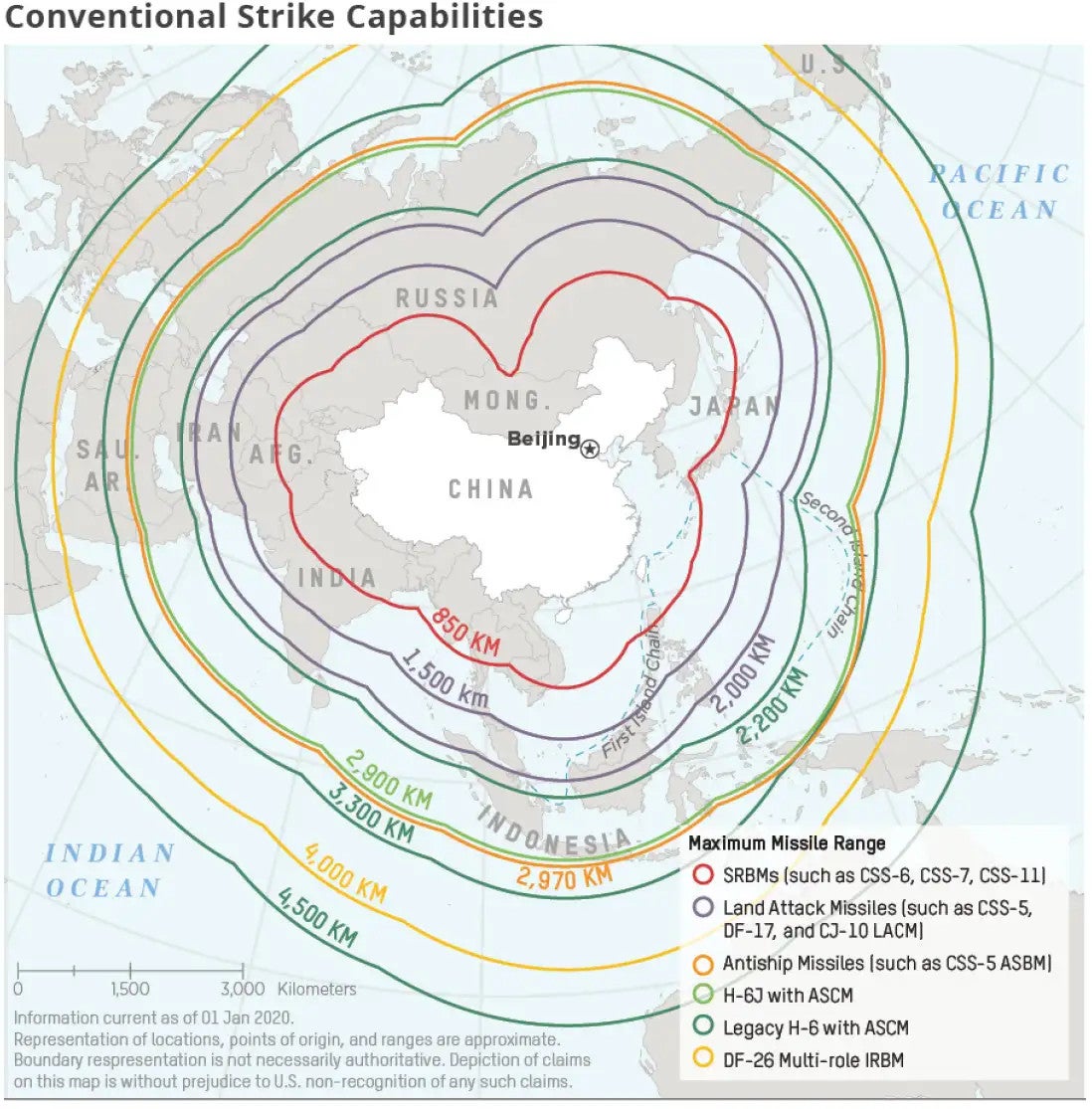 It’s worth noting the PLA has been launching ballistic missiles at generally ship-sized and shaped fixed targets in the Gobi Desert since at least 2013. However, this did not necessarily reflect an ability to hit moving targets at sea. In fact, some of these flat silhouettes were part of larger target arrays that were clearly arranged to reflect ships in port at American bases in Japan or Taiwanese naval facilities. The Chinese had also fired DF-26s from the western portion of the country into the South China Sea in a similar exercise in January 2019.

It’s still not entirely clear how Chinese forces may now be spotting and tracking targets at sea and cueing ballistic missiles, such as the DF-21D or DF-26B, to engage them. However, “the PLAN’s [People’s Liberation Army Navy’s] expanding network of sky wave and surface wave over-the-horizon (OTH) systems provide warning and targeting capabilities at extended distances from China to support long-range precision strikes, including employment of ASBMs [anti-ship ballistic missiles],” the Pentagon noted in its most recent annual report to Congress on the Chinese military. That same document indicated that the DF-26 series was becoming one of China’s preeminent ballistic missiles, with a reported dramatic increase in the number of those weapons in service in the past year.

Other ships, such as China’s new and very capable Type 055 destroyers, as well as long-range maritime patrol and surveillance aircraft, could help find enemy fleets and relay that targeting information to missile units. China also has a steady expanding fleet of unmanned aircraft, including increasingly advanced high-altitude, long-endurance types, which could also be used in this role. In the South China Sea, the PLA may further be able to make use of any fixed long-range sensors on its man-made island outposts, which includes aerostats. The Chinese government has also been expanded its space-based sensor capabilities in recent years.

The maneuvering reentry vehicles themselves likely have some form of guidance, such as a radar or imaging infrared seeker, to zero in on their targets in the terminal phase of flight, as well. The CM-401, a short-range anti-ship ballistic missile that China is developing, notably features a radar seeker for terminal guidance, though it’s not clear if that its only guidance option.

Regardless, if the PLA can now reliably engage large warships using long-range ballistic missiles, this would represent a major additional anti-access/area denial capability, in general, but especially in the South China Sea.

As noted, the DF-26B was reportedly fired from Qinghai, well inside China proper, which provides an extra layer of protection to the launching unit from preemptive or counter-strikes. Even being able to launch DF-21D missiles at ships from bases in eastern China would offer those units added survivability.

This is all on top of the immense flexibility that ground-based ballistic missiles could offer in the anti-ship role simply by being able to engage targets across a very broad area without necessarily having to relocate first. At the same time, the DF-21D and DF-26 are both road-mobile and could be repositioned to be closer to the target area in order to shorten the time it might take for the weapon to get there, an important consideration for engaging even slow-moving ships, as well as any other time-sensitive and fleeting targets.

All of this also means that this capability would not necessarily be limited to use during any potential conflict in the South China Sea. DF-26s in Qinghai would be just as capable of hitting ships in the Yellow Sea, the East China Sea, and the Philippine Sea, during a major confrontation in the Western Pacific, further impacting the ability of opponents, such as the United States, to operate in those bodies of water, all of which equally strategic. These missiles could possibly engage vessels in the Indian Ocean, which could be a factor in a large-scale conflict with India, as well.

This revelation about the ballistic missiles reportedly having hit an actual moving target during the August drills comes amid a continued uptick in naval movements, as well as aerial military activity, on the part of the United States and its allies, as well China, in the broad Indo-Pacific region. Just weeks before the PLA fired the missiles near the Paracels, the U.S. Navy had sent two aircraft carriers, along with various escorting ships, into the South China Sea for the first time in years. Those flattops conducted various training maneuvers, including one involving an Air Force B-52 bomber, while they were there.

Right now, the United States, India, Japan, and Australia, a grouping known as “The Quad,” are notably in the middle of the latest iteration of the Malabar naval exercise in the Bay of Bengal. Australia is taking part in these drills for the first time in 13 years, underscoring an increased emphasis on regional cooperation in light of China’s increasingly assertive actions with regards to various territorial claims, especially in the South China Sea.

Just this weekend, Indian Foreign Minister Subrahmanyam Jaishankar “expressed concern about actions and incidents that erode trust in the region” at the 15th East Asia Summit, referring specifically to Chinese activities in the South China Sea, according to a statement from the country’s Foreign Ministry.

Tensions between Chinese and Taiwanese governments are also at a notable high point, and both parties have been conducting their own dueling military exercises, as well. Increasingly visible support for authorities in Taipei from their counterparts in Washington has added to the friction. On top of all this, the United States and China themselves have been increasingly sparring for months over a host of issues, ranging from Beijing’s fiery rhetoric toward Taiwan and its ongoing anti-democratic crackdown in Hong Kong to trade disputes and the handling of the global COVID-19 pandemic.

Anti-ship ballistic missiles represent just one way that China has been looking to add risk to the U.S. military’s operations in the Western Pacific and hamper it from challenging Chinese claims, in the South China Sea and elsewhere. While the PLA’s ability to engage moving ships with these weapons remains unconfirmed, there is mounting evidence that they are moving closer to being able to reliably employ this capability, if they can’t already do so.