If You’re Going to Go Around the World Plundering Oil Why Not Hit Saudi Arabia First?

You know...where the oil actually is 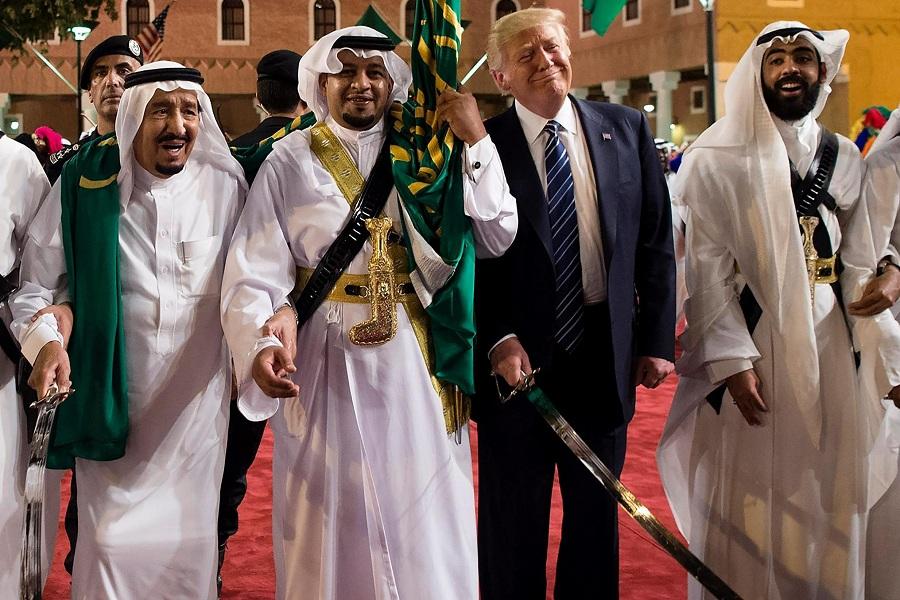 President Donald Trump has rightly decided to remove U.S. military personnel out of a zone of potential conflict involving Syrians, Iranians, Turks, and Kurds. He’s dismissed calls to maintain American forces there to protect the latter, despite the imminent threat of attack against the Kurds by Ankara. Meddling in other nations’ civil wars, Trump thinks, risks American lives and security.

Except then the president decided to deploy U.S. personnel to steal Syria’s oil. He announced that Washington would remain around al-Tanf in southern Syria to guard oil fields captured by the Kurds. Indeed, the number of Pentagon forces are expected to eventually number around 900, almost as many as the number withdrawn from the north. As some Americans leave, others are being deployed—to seize another nation’s resources. Indeed, the president said the U.S. will be “keeping the oil.”

Defense Secretary Mark Esper explained that the U.S. would “maintain a reduced presence in Syria and deny ISIS access to oil revenue.” He dismissed any idea of confiscating the petroleum. However, ISIS does not possess forces capable of taking, transporting, and selling the oil. An unnamed official cited “other destabilizing actors,” presumably meaning the Assad government, which, though brutally repressive, is the most stable force in Syria today. The excuse is a sham.

The president is being played by neoconservatives and other hawks who want Washington to take resources owned by the Syrian government to weaken it and, more important, keep America entangled in that country’s multiple conflicts.

This policy is beyond shameful. It is foolish and counterproductive. It dramatically undermines Washington’s credibility while sucking the U.S. into a potential battle over nothing of consequence.

Venal motives for military aggression are hardly unusual. However, governments rarely admit that they are acting for national profit. The Middle East has been a special case for some American hawks. As long as compliant Arab nations supplied low-cost energy, they saw little reason for military action. However, following the OPEC-driven run-up in oil prices and October 1973 Arab embargo against several Western nations, triggered by U.S. support for Israel during the Yom Kippur War, the idea of stealing oil gained traction.

The public hysteria was never justified. The embargo was ineffective, since the energy market is global. However, production cutbacks as well as domestic restrictions, which limited production, did hike prices. The roughly fourfold increase left oil costing almost $12 a barrel. That caused economic hardship but posed no security threat. The price, adjusted for inflation, was comparable to today’s levels.

Nevertheless, the Nixon administration developed plans for military action. In October 1973, White House Chief of Staff Alexander Haig reported that Defense Secretary James Schlesinger talked of “putting troops in crucial states to get oil.” The following month, Schlesinger told NATO allies that “the United States did not repeat not intend to be driven to the wall in this situation” and that “we will not tolerate this kind of blackmail.”

Secretary of State Henry Kissinger privately dismissed the idea of an oil grab, but observed at a subsequent news conference: “If pressures continue unreasonably and indefinitely, then the United States will have to consider what countermeasures it may have to take.” The House Committee on International Relations published a study on potential military action. The members contended that “economic warfare, most notably oil embargoes, currently could threaten most modern societies just as surely as nuclear weapons.” Allied states had to be protected: “Severe sanctions by oil producing countries thus would involve vital interests at a very early stage.”

In early 1975 President Gerald Ford emphasized that “in the case of economic strangulation,” the U.S. had to be prepared “to take the necessary action for our self-preservation.” Robert W. Tucker of Johns Hopkins University wrote an oft-cited article for Commentary in March 1975, which claimed that “if the present situation goes on unaltered, a disaster resembling the 1930s is indeed a distinct possibility and…would have as its immediate and precipitating cause the present oil price.” The same month, an anonymous writer, said to be Edward Luttwak of the Center for Strategic and International Studies, urged that force “be used selectively to occupy large and concentrated oil reserves,” most importantly in Saudi Arabia.

The war boomlet then faded until the First Gulf War, when Secretary of State James Baker warned that Iraq’s Saddam Hussein was in a position to “strangle the global economic order.” The threat was minimal, since Hussein planned to sell, not drink, the oil. Even if he conquered or cowed his Gulf neighbors, figured economist David Henderson, “the annual cost to the U.S. economy of doing nothing in the Persian Gulf would be at most half of one percent of our gross national product, and probably much less.” Washington spends more on its military commitments to the region than the worst-case cost of energy supply disruptions there.

Today, plunder is being advanced as a means to finance the war. Argued Senator Lindsey Graham: “We can also use some of the revenue from oil sales to pay for our military commitment in Syria.” But he likely has ulterior motives: using the oil gambit to get the president to keep U.S. forces in Syria.

The tactic appears to have worked. When announcing the death of the Islamic State’s Abu Bakr al-Baghdadi, the president cited the “valuable” oil and said: “We should be able to take some also.” He reiterated his oft-repeated view, that “I said keep the oil. If they are going into Iraq, keep the oil. They never did.”

In fact, Trump has long lusted after Iraq’s oil fields. More than once, he’s spoken of the United States having spent $1.5 trillion on that nation; therefore, “we should take [Iraq’s oil] and pay ourselves back.” He envisioned an occupation by the U.S. or its proxies of “various sections where they have the oil.” After taking office, he opined to CIA officials that the U.S. should have kept the oil, then added: “Maybe you’ll have another chance.”

No surprise, Iraqi officials were alarmed by such pronouncements. When Defense Secretary James Mattis visited Iraq in February 2017, he had to reassure the Iraqis that no oil would be seized. But the president persisted, arguing in September 2017: “You’re not stealing anything.” Rather: “We’re reimbursing ourselves.”

Now the president sees an easy opportunity to pillage Syria’s resources. Yet their value is modest at best. During the war, production dropped 15-fold to just 24,000 barrels a day, or about .03 percent of global output. The share of reserves is even less, just .02 percent.

Trump suggested that he’d “make a deal with an ExxonMobil or one of our great companies to go in there and do it properly.” But no private oil firm is likely to develop resources illegally held in a war zone in which conflict is likely and an eventual American withdrawal is almost certain. Doug Gilson of Mother Jones figured that if Washington could restore production and steal all of it, the annual total would be about $8 billion annually. That’s not a lot of gain for an occupation that costs and risks much more.

Moreover, holding the oil fields is not enough. For the U.S. to rehabilitate infrastructure and sell oil would require an expanded occupation—of roads, pipelines, facilities—and take years. Preventing sabotage to disable production would not be easy.

Yet the president appears ready to fight for the oil. He said: “Either we’ll negotiate a deal with whoever is claiming it, if we think it’s fair, or we will militarily stop them very quickly.” Secretary Esper said the U.S. would “respond with overwhelming military force against any group that threatens the safety of our forces there,” apparently even the legal owners, the Syrian government. Notably, China, India, and Russia all provided capital for the Syrian oil industry and are likely to oppose any Washington sale of stolen resources.

If America is going to revive the idea of invading other states and taking their resources, it would make more sense to begin at the top. Why not seize Saudi Arabia’s oil fields? The royals have proven incapable of defending their assets and Washington has good cause to exact compensation for decades of protecting the House of Saud.

Finally, pillaging a war-torn land would sacrifice America’s reputation as well as risk American lives. Former national security adviser H.R. McMaster warned that plundering Syria’s oil would make Americans look like “criminals and thieves.” Even Washington’s Gulf allies would be highly uncomfortable with such a precedent. Without naming the U.S., Turkish president Recep Tayyip Erdoğan recently told his party’s lawmakers: “They never hesitate to go after the oil. For them, a drop of oil is equal to the blood of thousands of people.” Any number of jihadists throughout the Muslim world are likely saying “I told you so” about American motives.

After explaining the administration’s oil grab, Esper said: “At the end of the day we will be sending troops home.” They should be brought home today. The president should not use the U.S. military as a pirate gang.