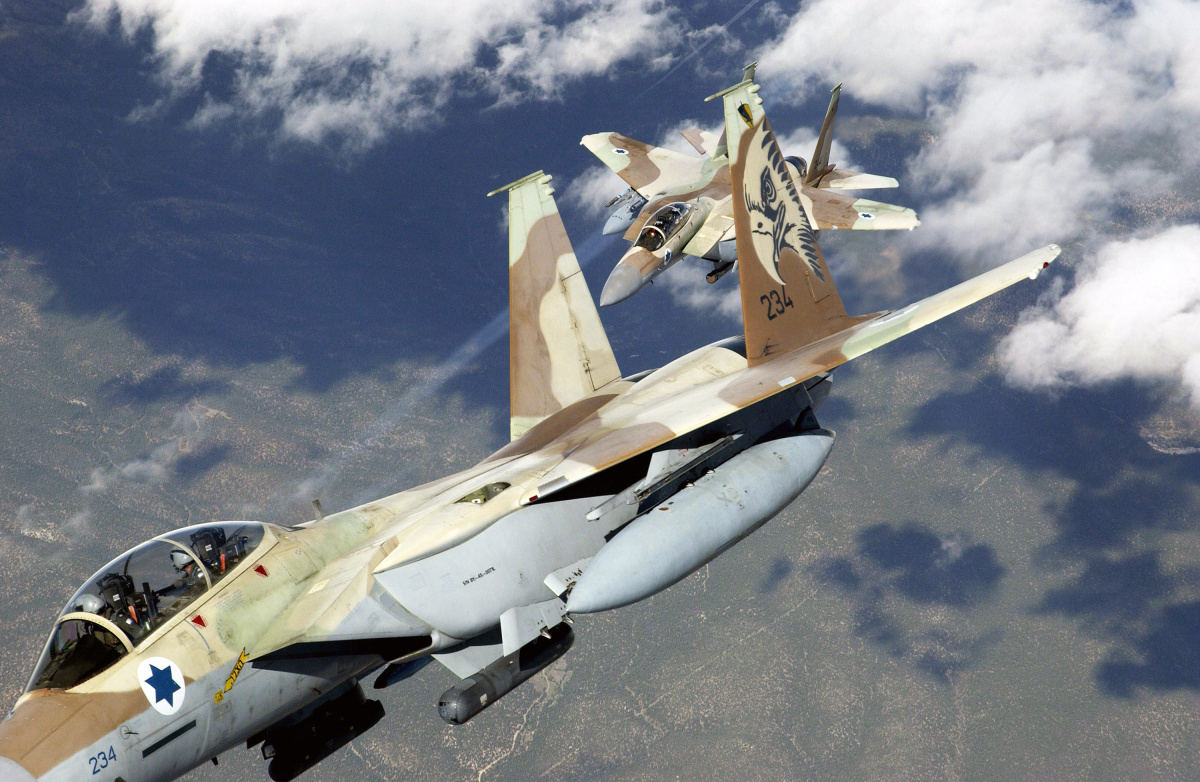 According to Americans, Israeli jets, drones or missiles flew over 500 kilometers all the way to the other side of Syria to make themselves an air force for ISIS

ISIS remains a threat in eastern Syria. It holds a stretch of land on the eastern bank of the Euphrates which the US has appropriated for itself and the Kurdish-dominated SDF coalition yet refuses to clear. The group also has numerous hiding places in the desert to the west of river which due to its vastness and lack of infrastructure is difficult to control.

June 8-10 ISIS fighters came out of these desert bases in a raiding counter-offensive. In the surprise attack it was able to take over part of the outskirts of the city of Abu Kamal which lies on the Syrian side of the border with Iraq, but were then forced to fall back.

Involved in repelling the ISIS were not just the Syrian army and local tribes organized in the NDF militia units, but also volunteer Iraqi militias of Kata’ib Hezbollah. Since this week this Syrian-Iraqi coalition has a new enemy.

On the night from June 17 to 18 air strikes hit Syrian military bases at Abu Kamal. They killed 22 Kata’ib Hezbollah fighters and an unknown number of Syrians. The Syrians first accused the Americans of hitting them — this was logical since the US hit the Syrian army in eastern Syria four times in May-June 2017, twice in February 2018, and again in April 2018. However Americans denied carrying out any such strikes, and Pentagon denials of this type are credible, as they did not deny any of the previous ones.

So what the heck was going on? This was cleared up when the wrongly accused Americans let it be known who had actually carried out the strikes — Israel:

A US official said on Monday Washington suspects that Israel is behind the air raid that killed dozens of pro-Syrian government fighters in Deir Ezzor province.

“We have reasons to believe that it was an Israeli strike,” the official told AFP on condition of anonymity following the Sunday night raid on Al-Hari, a town controlled by regional militias fighting alongside the Syrian government.

Damascus had accused Washington of being behind the attack; the US military denied any involvement. Iraq’s paramilitary group the Popular Mobilisation Units, which said it lost 22 fighters in the raid, backed the Syrian government’s claim that US aircraft carried out the strike.

“At 22:00 last night a US plane hit a fixed headquarters of the Popular Mobilisation Units’ 45th and 46th brigades defending the border strip with Syria, using two guided missiles which led to the martyrdom of 22 fighters,” the Iran-backed paramilitary group said in a statement.

It demanded an explanation from the United States.

An Iraqi military statement later said no Popular Mobilisation Forces or other Iraqi troops tasked with securing the Iraqi-Syrian border had been hit by the air strike, and it had taken place inside Syria.

“No member of the US-led coalition carried out strikes near Albu Kamal,” Major Josh Jacques, a US Central Command spokesman, told Reuters.

The Britain-based Syrian Observatory for Human Rights said the strike was one of the deadliest on forces allied with Syria’s government. According to the Observatory, 52 fighters were killed in the attack.

It is perhaps notable the Americans were not willing to bear the heat for something they hadn’t done and outed Israel. It may be an indication they are not too crazy about Israel actions here.

Israel demands that Lebanese Hezbollah and phantom Iranian forces (Iran only has individual advisers in Syria, not whole combat units) not be allowed to set up base within 40 miles of Syria’s Golan Heights it has occupied since 1967. The US strongly supports the Israel in this demand and even Russia is not entirely unsympathetic.

Yet here Israel flew more than 500 kilometers to the entire different side of Syria to hit Iraqi Hezbollah and the Syrian military engaged in very real battles against ISIS. It made itself into an air force for ISIS, and for what? That seems totally unclear.

An Israeli pundit told Al-Monitor the strike targeted “Iranian balance-breaking weapons transferred into Syria”, but the strike was against a fixed military installation, not a convoy, and besides it is impossible to close down a road from the air.