You know we’re living in strange political times when a newspaper like the New York Times can seriously describe a nation’s leader as someone ‘whose eye-catching sock selection has become global news’.

The leader in question is Justin Trudeau, the Canadian prime minister, whose right-on celebrity status has always been a useful distraction from his failures in parliament. But it now seems that the international swooning over Trudeau may finally be over, after his widely mocked state visit to India.

The cringey Canuck spent eight painstaking days humiliating his home nation at the taxpayers’ expense, posing for his trademark photo-ops before finally signing a trade deal with India. He wore a different coloured Indian outfit every day, posing for photos at various tourist hotspots. He even started Bhangra dancing at one point, and went to meet Bollywood stars dressed in a golden Sherwani (they wore black suits). A bemused New York Post remarked ‘Justin Trudeau is more Bollywood than Bollywood’.

It’s surprising Trudeau wasn’t accused of cultural appropriation for all this. But then again, Trudeau’s international fanboys have learned to keep their usual outrage in check where he is concerned.

Recently Trudeau corrected a woman when she said ‘mankind’ instead of ‘peoplekind’ during a Q&A. It was both ridiculous and ‘mansplaining’ at the same time. Trudeau later claimed he was making a bad joke. I genuinely don’t believe that he was, but I’ll certainly agree that it wasn’t funny. 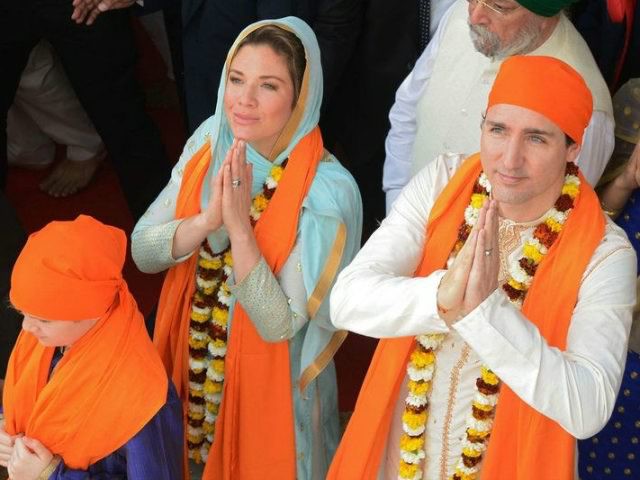 Trudeau’s India trip hasn’t only been a source of social-media mockery. He’s caused considerable offence in India due to the mysterious presence of Jaspal Atwal, a Sikh nationalist convicted of attempting to murder an Indian minister in Canada in 1986, who was pictured with Trudeau’s wife on the trip. He’s a former member of the International Sikh Youth Federation, which is considered a terrorist organisation in India, the US, the UK and Canada. Trudeau denies having anything to do with Atwal’s invitation.

Though Trudeau’s supporters have in recent days tried to shift the focus on to the Canada-India trade deal he signed, that amounted to a half-day of work during his eight-day sojourn. His $1 billion deal was inevitably overshadowed by his days of clowning for clickbait.

After this and the ‘peoplekind’ debacle, it seems the bubble has finally burst around Trudeau, a man who confuses virtue-signalling with statesmanship.

Indeed: Justin Trudeau would lose if an election were held tomorrow, India trip a symptom of shift in mood: Ipsos poll