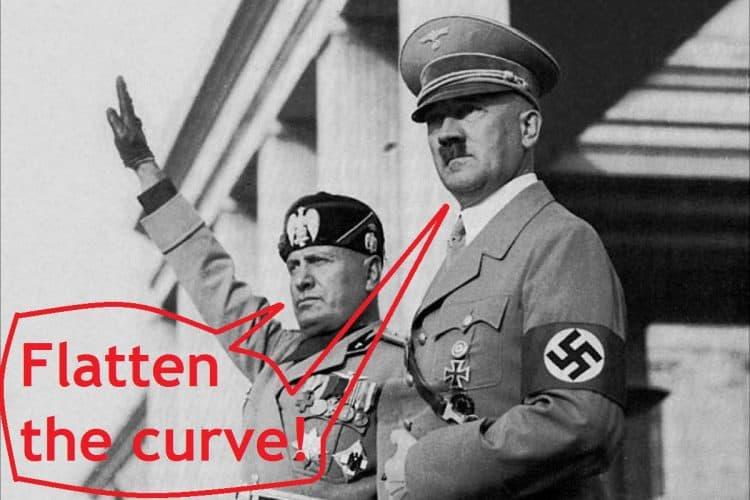 It’s the difference between the graphic atrocity of an ISIS beheading, and the indirect and sterile atrocity of Empire’s economic strangulation campaigns.

REMINDER: #Albright says 500,000 dead Iraqi Children was"worth it"
1996 #Iraq's GrimReaper,confirmed on 60Mins that the Deaths of Half Million Children as a result of the absolute Embargo: "A hard choice,but the price,we think the price is worth it"#Syriapic.twitter.com/cKixhkPRfy

The brutal killing of George Floyd by Minneapolis police spurred widespread protests which have been followed by looting in dozens of American cities. CNN’s Don Lemon compared looters who plundered Neiman Marcus and other upscale stores to those at the Boston Tea Party. But far more Americans likely agreed with Quinta Caylor, a black North Carolina nurse on Twitter, who denounced the looters who “THUGGED OUT in 1 day” businesses that owners had worked long and hard to build.

There are not yet any solid estimates of the total damage from the looting and burning that has occurred in many cities across the nation. Total losses may range in the tens of millions of dollars or perhaps in the hundreds of millions of dollars. The pillaging has been especially ruinous to many small family-owned businesses, some of whom may not have insurance to cover their losses.

Many cities have responded to violent rampages by imposing curfews and other severe restrictions on movement. Many such edicts are remarkably similar to the “shelter-in-place” COVID dictates imposed by many state governments. While the city curfews are a reflexive response to rioting, the unprecedented state-wide quarantines appear to have had scant impact in curbing the contagion.

"George is in a better place than we are"

The truest sentence of 2020: "George is in a better place than we are"

In Portland, Oregon, “rioters have broken into Portland’s main mall in downtown and began looting the Louis Vuitton. Youths ran out with designer bags. They shouted about expropriation,” as Andy Ngo tweeted. But that state suffered far more from Gov. Kate Brown’s edict that banned residents from leaving their homes except for essential work, buying food, and other narrow exemptions, and also banned all recreational travel, even though much of the state had few if any COVID cases. Almost 400,000 Oregonians have lost their jobs after Brown’s shutdown.

In Grand Rapids, Michigan, looters pillaged a shoe store and many other businesses. But the damage they inflicted was not even pocket change compared to the wreckage produced by Gov. Gretchen Whitmer. She prohibited anyone from leaving their home to visit family or friends. Whitmer severely restricted what stores could sell; she prohibited purchasing seeds for spring planting in stores after she decreed that a “nonessential” activity (unlike buying state lottery tickets). Though COVID infections were concentrated in the Detroit metropolitan area, Whitmer shut down the entire state – including northern counties with near-zero infections and zero fatalities, boosting unemployment to 24% statewide.

In Louisville, Kentucky, looters attacked the Omni Louisville Hotel and many other businesses.  But that isn’t why the Bluegrass State has the nation’s highest unemployment rate – 33%. That is thanks to Gov. Andy Beshear’s shutdown order that paralyzed the state even though COVID’s impact in Kentucky “has not been worse than an average flu season,” according to Sen. Rand Paul.

In the District of Columbia, looters pillaged an Apple Store. “I bet this is about the [COVID] contact tracing in the latest upgrade,” quipped one wag on Twitter. But Washington Mayor Muriel Bowser has inflicted vastly more damage on the city with a lockdown order that helped destroy almost 100,000 jobs.

Unedited version of viral video of store owner in Dallas getting beaten by crowd. In this, store owner waves sword and runs towards skateboarder, then crowd attacks. Store owner is alive. What are your thoughts?

In Richmond, Virginia, looters pillaged many black-owned small businesses as well as torching the headquarters of the United Daughters of the Confederacy.  Local damage is far outweighed by Gov. Ralph Northam shutting down the state economy for more than two months– including vast swaths of the Old Dominion that had few if any COVID cases, helping destroy more than half a million jobs.

In Rochester, New York, looters ransacked the Villa shoe store and many other businesses and brutally beat a female store owner seeking to defend her small business. New York City also saw widespread looting.  But more than two million New Yorkers have lost their jobs since Gov. Andrew Cuomo effectively put almost 20 million people under house arrest – a drastic step that he said would be justified if it “saves just one life.” Most counties had only a smattering of COVID cases before Cuomo caused profound upheaval in the lives of vast numbers of his subjects. Also, unlike for Cuomo, there is no evidence tying the looters to 5,000+ deaths in nursing homes.

The Dallas store owner pulled from his store and beaten by a Mob.

Passed away this Morning. pic.twitter.com/WK7KE3ANpm

In Minneapolis, looters plundered stores and restaurants in East Lake Street, a well-known haven for Black and Latino-owned businesses, as well as burning down the nation’s oldest independent science fiction bookstore. A black former firefighter was left in tears after looters ravaged the sports bar he was planning to open. Gov. Timothy Walz’s statewide shutdown decree helped destroy almost 400,000 jobs, including that of George Floyd, who lost his gig as a bouncer after the governor’s order shut down the restaurant where he worked.

Most of the media coverage, reciting the official narrative that shutdowns were vital and justified, has ignored the human carnage of the COVID shutdowns. Almost 40% of households earning less than $40,000 per year have someone who lost their job in recent months, according to the Federal Reserve. Politicians destroyed much of the economy in the name of “risk reduction.” Unprecedented restrictions on personal and economic freedom were justified in part by federal Centers for Disease Control fatality forecasts that turned out to be wildly exaggerated.

Some leftists on Twitter urged the looters to go after national chain stores such as Target and avoid small family-owned businesses.  Politicians issuing COVID shutdown decrees followed the opposite standard, effectively padlocking small businesses while Walmart and other large stores easily received the “essential” bureaucratic holy water and Amazon practically won the lottery. The recent riots may have destroyed hundreds of businesses. But forecasts predict that millions of businesses could be forced to close or file bankruptcy because of the pandemic disruptions.

April 1: "Let's torch the Bill of Rights and the economy."June 1: "Whatever's left, let's burn that too."lol you guys

The people who pillaged stores in recent days deserve vigorous prosecution, and the deluge of Twitter plundering-in-progress videos could make it easier to identify culprits. It remains to be seen whether mayors will have the gumption to throw the book at the thieves. But it is even less likely that the politicians and other government officials who inflicted far greater damage on the economy will ever be held liable.

Hang Them Both?
Thanks for subscribing! Any daily digest sent will come with an unsubscribe link in the footer.