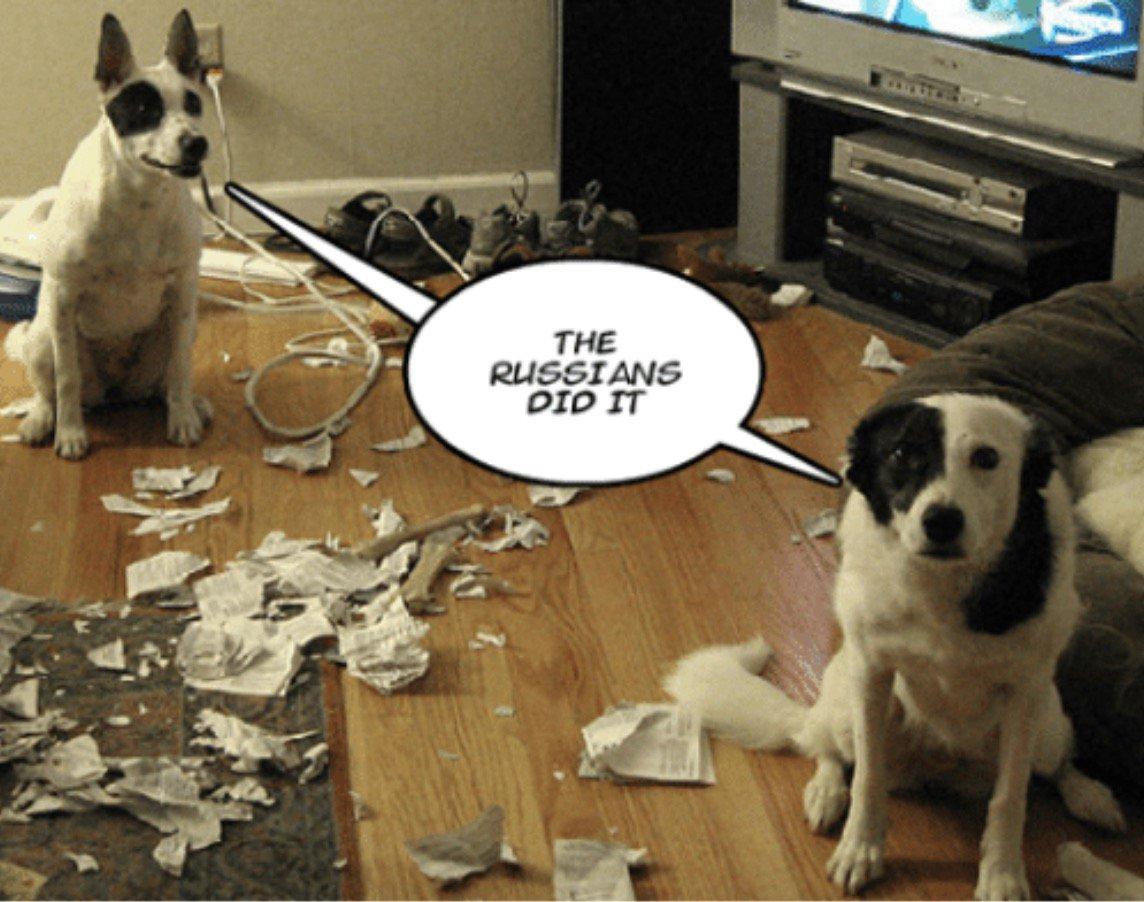 The release of Justice Department Inspector General Michael Horowitz’s report, which shows that the Democrats, media, and FBI lied about not interfering in an election, will be a historian’s marker for how a decent nation fooled itself into self-harm. Forget about foreigners influencing our elections; it was us.

The Horowitz Report is being played by the media for its conclusion: that the FBI’s intel op run against the Trump campaign was not politically motivated and thus “legal.” That covers one page of the 476-page document, but because it fits with the Democratic/mainstream media narrative that Trump is a liar, the rest has been ignored.

We learn from the Horowitz Report that it was an Australian diplomat, Alexander Downer, a man with ties to his own nation’s intel services and the Clinton Foundation, who set up a meeting with Trump staffer George Papadopoulos, creating the necessary first bit of info to set the plan in motion. We find the FBI exaggerating, falsifying, and committing wicked sins of omission to buffalo the Foreign Intelligence Surveillance Act (FISA) courts into approving electronic surveillance on Team Trump to overtly or inadvertently monitor the communications of Paul Manafort, Michael Cohen, Jared Kushner, Michael Flynn, Jeff Sessions, Steve Bannon, Rick Gates, Trump transition staffers, and likely Trump himself. Trump officials were also monitored by British GCHQ, the information shared with their NSA partners, a piece of all this still not fully public.

We learn that the FBI greedily consumed the Steele Dossier, opposition “research” bought by the Clinton campaign to smear Trump with allegations of sex parties and pee tapes. Most notoriously, the dossier claims he was a Russian plant, a Manchurian Candidate, owned by Kremlin intelligence through a combination of treats (land deals in Moscow) and threats (kompromat over Trump’s evil sexual appetites). The Horowitz Report makes clear the FBI knew the Dossier was bunk, hid that conclusion from the FISA court, and purposefully lied to the FISA court in claiming that the Dossier was backed up by investigative news reports, which themselves were secretly based on the Dossier. The FBI knew Steele had created a classic intel officer’s information loop, secretly becoming his own corroborating source, and gleefully looked the other way because it supported his goals.

Horowitz contradicts media claims that the Dossier was a small part of the case presented to the FISA court. He finds that it was “central and essential.” And it was garbage: “factual assertions relied upon in the first [FISA] application targeting Carter Page were inaccurate, incomplete, or unsupported by appropriate documentation, based upon information the FBI had in its possession at the time the application was filed.” One of Steele’s primary sources, tracked down by FBI, said Steele had misreported several of the most troubling allegations of potential Trump blackmail and campaign collusion.

We find human dangles, what Lisa Page referred to as “our OCONUS lures” (OCONUS is spook-speak for Outside CONtinental US) in the form of a shady Maltese academic, Joseph Mifsud, who himself has deep ties to multiple U.S. intel agencies and the Pentagon, paying Trump staffers for nothing speeches to buy access to them. We find a female FBI undercover agent inserted into social situations with a Trump staffer (pillow talk is always a spy’s best friend). It becomes clear the FBI sought to manufacture a foreign counterintelligence threat as an excuse to unleash its surveillance tools against the Trump campaign.

We learn that Trump staffer Carter Page, while under FBI surveillance, was actually working for the CIA in Russia. The FBI was told this repeatedly, yet it never reported it to the FISA court while seeking approval for its secret investigation of Page. An FBI lawyer even doctored an email to hide the fact that Page was working for the Agency and not the Russians; it was that weak a case. The Horowitz Report went on to find “at least 17 significant errors or omissions” concerning FBI efforts to obtain FISA warrants against Page alone. California Congressman Devin Nunes raised these points almost two years ago in a memo the MSM widely discredited, even though we now know it was basically true and profoundly prescient.

Page was a nobody with nothing, but the FBI needed him. Horowitz explains that agents “believed at the time they approached the decision point on a second FISA renewal that, based upon the evidence already collected, Carter Page was a distraction in the investigation, not a key player in the Trump campaign, and was not critical to the overarching investigation.” They renewed the warrants anyway, three times, largely due to their value under the “two hop” rule. The FBI can extend surveillance two hops from its target, so if Carter Page called Michael Flynn who called Trump, all of those calls are legally open to monitoring. Page was a handy little bug.

Carter Page was never charged with any crime. He was blown into a big deal only by the fictional Steele Dossier, an excuse for the FBI to electronically surveil the Trump campaign.

When Trump was elected, the uber-lie that he was dirty with Russia was leaked to the press most likely by James Comey and John Brennan in January 2017 (not covered in the Horowitz Report), and a process, which is still ongoing, tying the president to a foreign power, began. “With Trump, All Roads Lead to Moscow,” writes the New York Times even today, long after both the Mueller Report and now the Horowitz Report say unambiguously otherwise. “Monday’s congressional hearing and the inspector general’s report tell a similar story,” bleats the Times, when in fact the long read of both says precisely the opposite.

Michael Horowitz, the author of this current report, should be a familiar name. In January 2017, he opened his probe into the FBI’s Clinton email investigation. In a damning passage, that 568-page report found it “extraordinary and insubordinate for Comey to conceal his intentions from his superiors…for the admitted purpose of preventing them from telling him not to make the statement, and to instruct his subordinates in the FBI to do the same. By departing so clearly and dramatically from FBI and department norms, the decisions negatively impacted the perception of the FBI and the department as fair administrators of justice.”

Horowitz’s Clinton report also criticizes FBI agents and illicit lovers Peter Strzok and Lisa Page, who exchanged texts disparaging Trump before moving from the Clinton email probe to the Russiagate investigation. Those texts “brought discredit” to the FBI and sowed public doubt. They included one exchange reading, “Page: “[Trump’s] not ever going to become president, right? Strzok: “No. No he’s not. We’ll stop it.”

If after reading the Horowitz Report you want to focus only on its page one statement that the FBI did not act illegally, you must in turn focus on what is “legal” in America. If you want to follow the headlines saying Trump was proven wrong when he claimed his campaign was spied upon, you really do need to look up that word in a dictionary and compare it to the tangle of surveillance, foreign government agents, undercover operatives, and payoffs that Horowitz details.

You may accept the opening lines of the Horowitz Report that the FBI did not act with political bias over the course of its investigation. Or you can find a clearer understanding in Attorney General William Barr’s summary of the Report: “that the FBI launched an intrusive investigation of a U.S. presidential campaign on the thinnest of suspicions.” You will need to reconcile the grotesque use the information the FBI gathered was put to after Trump was elected, the fuel for the Mueller investigation, and years’ worth of media picking at the Russian scab.

The current Horowitz Report, read alongside his previous report on how the FBI played inside the 2016 election vis-a-vis Clinton, should leave no doubt that the Bureau tried to influence the election of a president and then delegitimize him when he won. It wasn’t the Russians; it was us. And if you walk away concluding that the FBI fumbled things, acted amateurishly, failed to do what some claim they set out to do, well, just wait until next time.

On a personal note, if any of this is news to you, you may want to ask why you are only learning about it now. The American Conservative has been one of the few outlets that’s consistently exposed the Steele Dossier as part of an information op nearly since it was unveiled, and which has explained how the FISA court was manipulated, and which has steadily raised the question of political interference in our last election by American intelligence services. We claim no magical powers or inside information. To those of us who have been on the fringes of intelligence work, what was obvious just from the publicly available information was, well, obvious.

If you are reading any of this for the first time, or know people who are reading bastardized MSM versions of it for the first time, you might ask yourself why those outlets went along with Steele, et al. Their journalists are no dumber or smarter than ours. They do, however, write with a different agenda. Keep that in mind as we flip the calendar page to 2020.