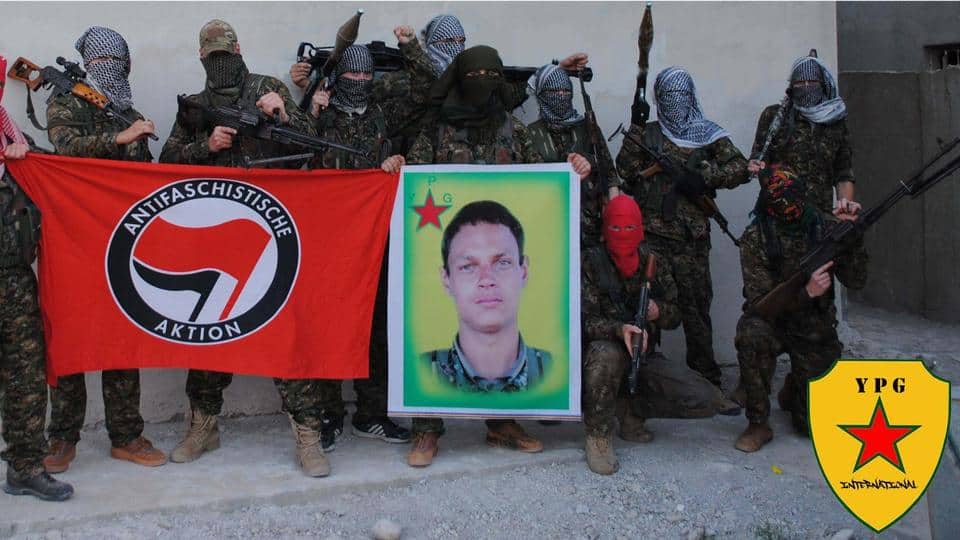 Turkish commentators and a Kurdish armed group in Syria are at odds over the latter’s alleged connections to the ongoing riots in the US.

US President Donald Trump tweeted yesterday he would declare the left-wing ANTIFA movement a terrorist organization after its apparent role in protests and riots in the US. Trump’s statement prompted some in Turkey to draw a connection between the movement and the Kurdish group in Syria the People’s Protection Units (YPG), which the US backs against the Islamic State (IS) and which has accepted some international volunteers with ANITFA affiliations. One former foreign fighter in the YPG said that while there were ANTIFA supporters in the YPG, they do not represent the group nor its foreign volunteers as a whole.

“It’s no secret that international antifascists joined the YPG,” Joshua Molloy told Al-Monitor. “But to say all international YPG volunteers were ANTIFA activists is not accurate.” 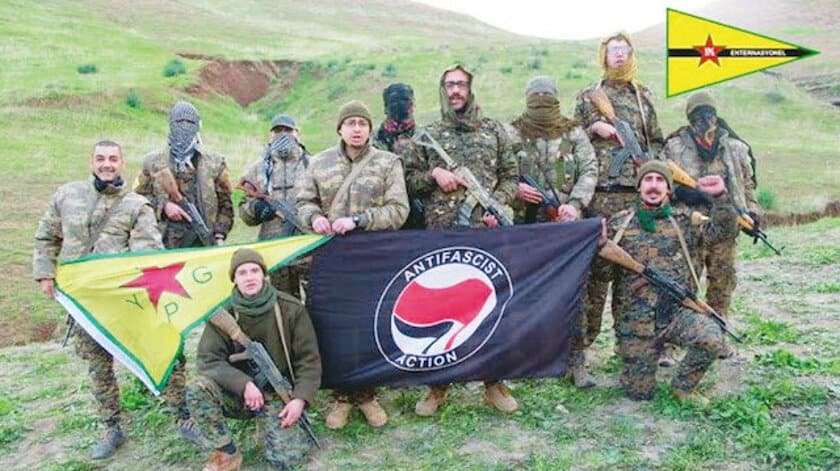 The US is currently engulfed in protests and riots following the death of George Floyd. The late Floyd was an African-American former security guard who died while in the custody after a white policeman kneeled on his neck. The role of ANTIFA, a loosely-organized protest movement that rose to prominence following Trump’s election, came into focus following their presence at the subsequent demonstrations. ANTIFA supporters have endorsed fires and property destruction during the protests. They have also clashed with far-right groups likewise known for violence in the past.

Following Trump’s tweet, several Turkish commentators started saying that ANTIFA were present in the YPG and that Trump should stop supporting the Kurdish ally as a result.

The YPG has a communalist and feminist ideology. Its early success against IS prompted hundreds of Westerners to join the group on the battlefield. Turkey considers the YPG a terrorist organization and an offshoot of the Kurdistan Workers Party (PKK) that it has been in conflict with for decades.

Turkish state-run media outlet TRT ran an article entitled “Antifa: Trained by terrorist PKK in Syria, may end up outlawed in the US” following Trump’s tweet.

Another TRT journalist replied to Trump’s tweet asking why the US is supporting the YPG given the apparent ANTIFA connection. His reply showed a picture of YPG fighters holding up an ANTIFA flag. 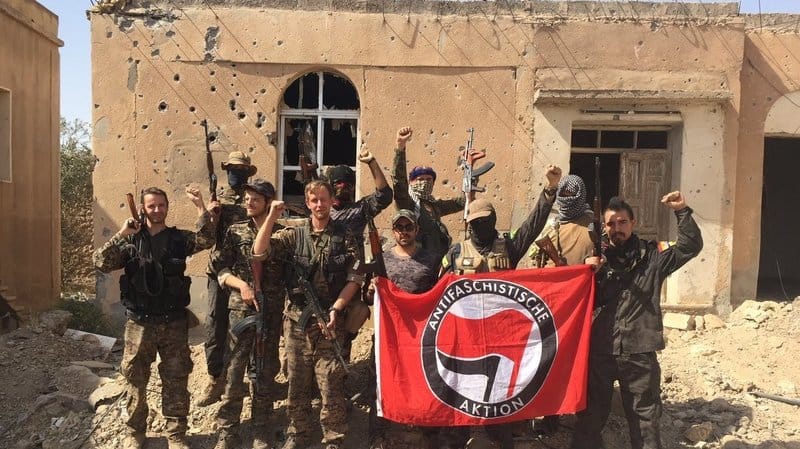 A columnist for the pro-Turkish government Daily Sabah newspaper quoted Trump on Twitter, saying “next should be YPG” regarding the terrorist designation.

Some former foreign members of the YPG admit there were ANTIFA supporters in their ranks, but say the connection is not as strong as some in Turkey believe. Molloy, an ex-British soldier from Ireland, fought in the YPG from 2015 to 2016 – one of several veterans of Western militaries to do so. He said there were a perse range of ideologies among foreigners who joined.

“Close to half of all international volunteers killed in Rojava were non-political and held a perse range of beliefs,” he said, using the Kurdish term for northeast Syria. “Initially, leftists were a minority among the international YPG volunteers.”

Molloy said the number of leftists grew somewhat over time, but that they never constituted a majority.

“From early to mid-2016 onwards, their numbers grew to be more evenly split with that of the non-political volunteers,” he said. 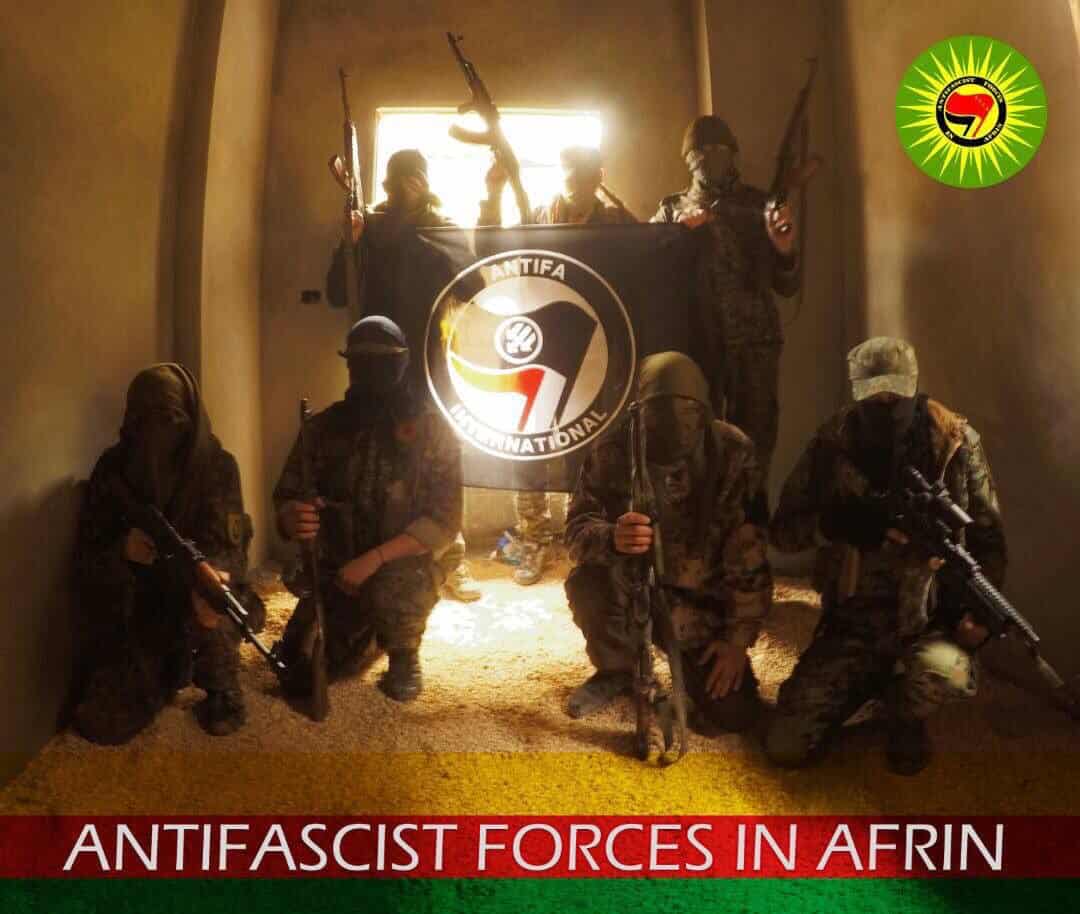 The foreigners in the YPG have largely been from North America, Europe and Australia. Many Turkish leftists also continue to fight alongside the YPG. Other foreigners joined Christian armed groups in Syria and Iraq, as well as Kurdish peshmerga forces in Iraq.

An American who fought in the YPG in 2016 said he saw some ANTIFA supporters there. Paul, who declined to give his last name, said he did not agree with their politics, but worked with them and various other people he came into contact with.

“There were probably 20. They were fine. I tried to avoid them as much as possible. Personally, I don’t agree with what they’re about,” Paul told Al-Monitor. “I taught medicine and trained Turkish communists, too. It didn’t matter to me.”

Paul agreed with Molloy that more leftists joined over time and he said ANTIFA supporters and other groups had their own units in the YPG, but he disputed that there is any formal alliance.

“There’s no real connection,” he said. “ANTIFA units only recruited their own. It doesn’t mean the YPG has any official relationship with ANTIFA, which they don’t.” 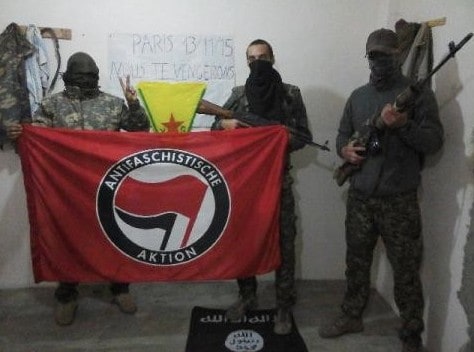 The foreign volunteers have received significant media coverage, but the majority of YPG fighters are Syrian Kurds. The YPG leads the multi-ethnic Syrian Democratic Forces (SDF) that fights IS with US support. Its main allies are not international groups, but Syrian Christian and Arab military organizations in the SDF.

Wladimir van Wilgenburg, co-author of the recently published book “The Kurds of Northern Syria,” likened the YPG’s acceptance of foreigners with different ideological persuasions to the international brigades during the Spanish civil war.

“The YPG initially saw the volunteers comparable to the Spanish civil war when anti-fascists went to Spain,” he told Al-Monitor. “There were some anarchists from European countries and the US, but also you had liberal, right-wing and all kinds of people.”

Turkey adamantly opposes US support for the YPG, believing them to simply be the PKK on their border. Some Turkish commentators frequently criticize the US-YPG relationship. A report from the Turkish think tank SETA in January pleaded with the the US to reexamine its support for the YPG, blaming the group for attacks on civilians in Turkish-controlled parts of Syria and accusing it of pursuing demographic change vis-a-vis Arabs.

It is therefore not surprising that during this tumultuous time in the US, some in Turkey linked the YPG to ANTIFA, considering Trump’s disdain for the latter and Turkey’s opposition to the former.