the US took over from Britain in the 1940s, now China is taking over from the US

Editor’s note: Article astutely notes the US took over from Britain as the world’s foremost champion of free trade roughly at the time when it eclipsed its old colonial master economically, politically and militarily. That China is now taking over as the champion from the US tells you it is the rising and self-confident economic power eclipsing the increasingly defensive and insecure US. It won’t be long before China takes the economic crown now. 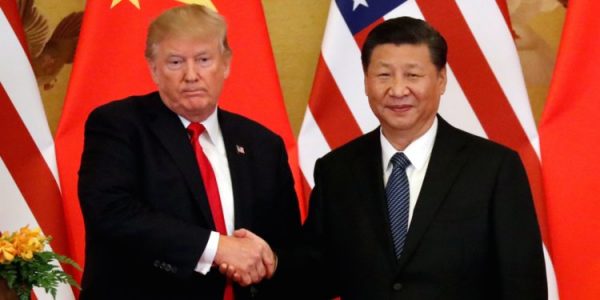 Presume not that China is the thing it was.

That’s certainly the message Premier Li Keqiang intends to convey with his promise Tuesday to cut levies on imports. Almost simultaneously, Bloomberg News reported that the Trump administration will impose tariffs on as much as $60 billion of Chinese products as soon as this week. Have the world’s great protectionist and its leading free trader switched sides?

It wouldn’t be so surprising if they did.

The U.S. was an ardent protectionist for most of the 19th century, never really coming around to the idea of free trade until the 1940s, when the Bretton Woods conference laid the foundations of the global postwar economy. Having raised barriers to strengthen its industrial might, it backed off only when the dawn of the consumer era made them more of a hindrance than a help.

That history tracks closely with the way China perceives its changing economic destiny. President Xi Jinping’s abolition of term limits is being discussed as an opportunity to complete the shift from industrial activity and toward mass consumption, which was kicked off, then aborted, during his first term.

The People’s Republic has already become the world’s largest exporter and manufacturer, and the biggest economy in purchasing-power parity terms. It’s likely to overtake the U.S. even in nominal terms around the time Xi completes a third term.

In November, the country’s Ministry of Commerce will stage its first international import expo in a bid to present the country to trading partners not as a locus for production lines but as a huge consumer pool to be targeted.

In a country where Jiangling Motors Corp. is still marketing its Landwind X7, a blatant knock-off of the Land Rover Evoque, it’s reasonable to scoff.

At the same time, it would be naive to assume Beijing won’t follow through, at least in part. As Gadfly has argued, the most sophisticated response to President Donald Trump’s anti-trade actions could be to do nothing, even with a product like soybeans where China may have some leverage.

Not Such a Great Wall

China’s formal tariff barriers are already some of the lowest in the Group of 20 leading economies, and several long-protected industries, including financial services and automotive joint ventures, are on a glacial path toward reform. Other contentious areas, such as technology transfers, will probably be used less as China’s own research and development spending overtakes that of many developed nations.

That will still leave swathes of the economy closed to the outside world in a way that will belie Li’s attempts to present China’s government as a born-again free trader.

There’s no hint Beijing is any closer to opening up its tech sector to foreign competition, let alone industries like media that butt against its restrictions on free speech. It’s hard to believe China would let the rule of law prevail in disputes between local heroes and offshore rivals, or stop putting its thumb on the scale in favor of state-owned and well-connected enterprises.

Still, that’s not the primary objective. The long game is the one Xi himself outlined at the Communist Party’s national congress last year — that China should attain global leadership by 2050. Prising apart the transatlantic alliance by posing as the defender of the global order against an increasingly isolationist America fits that agenda perfectly. That Washington should now be assisting this makeover must count as an unexpected bonus.