Between high reserves, budget surpluses, high interest rate, and most of all, historically low inflation rate for Russia creditors are now willing to be repaid in free-floating rubles 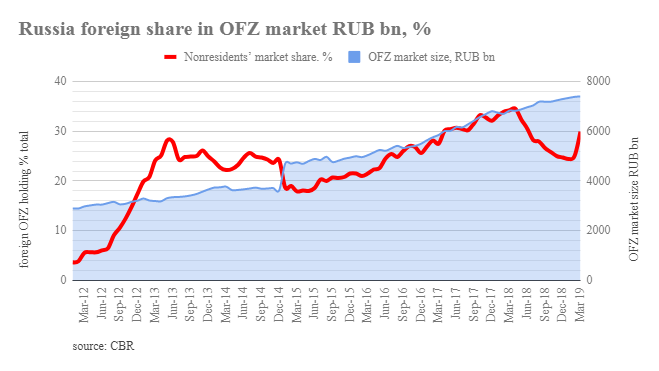 Russia’s ruble-denominated debt has thus jumped from about $7.7 billion to about $9.6 billion (an increase of 24 percent). Foreign investors hold about 30 percent of that (Russia abolished the ruble peg to the dollar in late 2014 )

Russia’s Ministry of Finance has held a series of record breaking auctions this year after a dearth last autumn when the ministry had to cancel several auctions because of the lack of demand.

Imre speculates that the share of foreign investors will probably continue to increase in March and April thanks to a number of factors. Russia’s macro economy is in rude health with strong tax collection and pre-crisis high gross international reserves (GIR). The economy is back into a triple – trade, currency account and federal budget – surplus, adding to the appeal of its high-yielding bonds that pay circa 8% per year in a world of near-zero interest rates.

Add to this the fading fears of more punitive US sanctions on Russia and the US Federal Reserve bank’s signals that it will not tighten monetary policy more this year.

While the Defending American Security Against Kremlin Aggression Act (DASKAA) sanctions are due to be considered by the US Congress in the first half of this year and could target more Russian companies as well as the sovereign bonds, investors clearly feel the danger of really painful new sanctions is fading.

The most painful part of last year’s April sanctions on Russian oligarch Oleg Deripaska and his Rusal aluminium producer have been dropped and in the last week Deripaska said he was in talks with the US Treasury Department (USTD) about dropping sanctions on his carmaker GAZ as part of renewed joint venture negotiations with Germany’s Volkswagen.

Finally bond investors were further buoyed by the milder than expected inflation feed through from a hike in the VAT rates implemented at the start of this year. While no one expects a rate cut at the next Central Bank of Russia (CBR) meeting due later this month, analysts are speculating that monetary easing may resume in the third quarter.

“Although we continue to expect another US sanctions round, it might be not necessary to respond with another rate hike (still our base case) from a CBR point of view. Our conviction regarding the latter has indeed decreased significantly and we will watch next week’s rate setting meeting closely for a possible revision of our base rate forecasts,” Imre said.